Sacagawea’s role and significance in the Lewis and Clark expedition

Sacagawea at the Three Forks

Sacagawea was the only female among 32 male members of the Lewis and Clark expedition. She was part of the main party from April 7, 1805 until August 14, 1806. Her official role was that of a Shoshone interpreter. However, she was not in the payroll as was Toussaint Charbonneau, her French Canadian husband. After the expedition Charbonneau was paid $533.33 for his interpreting services and was also given 320 acres of land in Missouri. Sacagawea on the other hand was paid nothing. She fulfilled many roles as the expedition progressed and proved to be an asset for the Corps of Discovery.

Her presence was her greatest contribution as it served to defuse tensions between the explorers and Native Americans. Native Americans approached westerners with great caution and hesitation but after seeing Sacagawea with her son strapped to her back they were assured that the explorers had peaceful intentions. For many Sacagawea represents a symbol of the expedition’s peaceful purposes and, as controversial as it may be, a building bridge in the success in Indian relations. The following is Clark’s observation in his journal dated October 13, 1805:

“The wife of Shabono our interpreter we find reconciles all the Indians, as to our friendly intentions a woman with a party of men is a token of peace”. 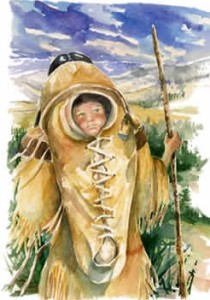 This is how Sacagawea may have carried Jean Babtiste.

Historians have given numerous assessments as to her role as a guide of the expedition. Her contribution to the Corps of Discovery is based on identifying landmarks she remembered from her childhood and suggesting routes that were familiar to her near Shoshone lands. Before they arrived at the Shoshone nation Lewis made three journal entries mentioning familiar landmarks that Sacagawea remembered from her childhood. There are no other journal entries stating Sacagawea’s familiarity with another area. The rest of the regions were unfamiliar to her as it was to the rest of the expedition. On July 22, 1805 Lewis’s journal entry stated:

“the Indian woman recognizes the country and assures us that this the river on which her relations live, and that the three forks are at o great distance. This piece of information has cheered the sperits of the party who now begin to console themselves with the anticipation of shortly seeing the head of the Missouri yet unknown to the civilized world.”

A journal entry by Lewis on July 30:

“sharbono, his woman two invalleds and myself walked through the bottom on the Lard. side of the river about 41/2 miles when we again struck it at the place the woman informed us that she was taken prisoner. here we halted untill Capt. Clark arrived which was not untill after one P.M.”

She successfully recognized Beaver Head Rock as a landmark of the area where she was kidnapped as a child. On August 8, 1805 Lewis wrote this entry in his journal:

“the Indian woman recognized the point of a high plain to our right which she informed us was not very distant from the summer retreat of her nation on a river beyond the mountains which runs to the west. this hill she says her nation calls the beaver’s head from a conceived remblance of its’s figure to the head of that animal. She assures us that we shall either find her people on this river or on the river immediately west of it’s source; which from it’s present size cannot be very distant.”

After Sacagawea recognized the Beaverhead rock Lewis, with two other explorers, set out by land to find the Shoshones while Clark continued down the river with the rest of the group. Lewis found the Shoshones three days after their departure. Clark and the rest of the expedition arrived one week after Lewis. Soon Sacagawea discovered that the chief was her brother Cameahwait. After they reached the Pacific Ocean and on the way back Clark wrote the following entry on his journal. It is dated July 13, 1806:

“The indian woman who has been of great Service to me as a pilot through this Country recommends a gap in the mountain more South which I shall cross.-.

This entry by Clark shows that Sacagawea proved to be an asset to the expedition and that he trusted her recommendation.

The interpreting process was cumbersome. Clark’s communication with Chief Cameahwait had to be translated from English to French, from French to Hidatsa and from Hidatsa to Shoshone. The process was reversed when Chief Cameahwait spoke. It involved Francois LaBiche, Toussaint Charbonneau and Sacagawea respectively. This multistage communication was common at the time when multiple tribes spoke different languages, oral interpretation was complemented with sign language.The meeting with the Shoshone was crucial to the success of the expedition as they needed to gather horses to carry supplies across the Rockies. The importance of meeting with the Shosones was described by Lewis in this entry on August 8, 1805:

“as it is now all important with us to meet with those people as soon as possible, I determined to proceed tomorrow with a small party to the source of the principal stream of this river and pass the mountains to the Columbia; and down that river until I found the Indians; in short it is my resolution to find them or some others, who have horses if it should cause me a trip of one month. For without horses we shall be obliged to leave a great part of our stores, of which , it appears to me that we have a stock already sufficiently small for the length of the voyage before us.”

Thanks to Sacagawea and to her relation with her brother, Chief Cameahwait, the expedition was able to trade horses and borrow a guide to lead them through the mountains.

Sacagawea proved to be a very resourceful traveler. Journal entries show that she introduced native roots and fruits to the members of the expedition. One month after their departure from Fort Mandan Clark observed:

“in walking on Shore with the Interpreter & his wife, the Squar Geathered on the Sides of the hills wild Lickerish, & the white apple as called by the angegies and gave me to eat, the Indians of the Missouri make great use of the white apple dressed in different ways”

On May 16, 1805 Lewis made the following observation in his journal:

“the Indian woman to whom I ascribe equal fortitude and resolution, with any person onboard at the time of the accedent, caught and preserved most of the light articles which were washed overboard all matters being now arranged for our departure we lost no time in seting out;”

The day before this journal entry the expedition was hit by a wind storm which capsized the boat where Charbonneau was travelling. The boat carried important scientific information gathered in journals as well as medicine and tools. Charbonneau, who did not know how to swim, panicked instead of collecting the goods while Sacagawea reached for them. Her level headed behavior saved documents and tools that would have been lost forever.

As the expedition was approaching the Pacific coast they met a group of Chinook and as it was common they exchanged gifts. At the initial meeting the locals gave the explorers two very much needed black bear fur coats for the upcoming winter. Captains Lewis and Clark gave the two chiefs, Comcommoly and Chillarlawil, medals and a flag. Lewis observed that one of the chiefs was wearing a robe made with the fur of two sea otters and referred to it as the most beautiful fur they have ever seen; they wanted it as a present for President Jefferson. Lewis and Clark tried to trade several items for it but they refused. Eventually after much negociation they accepted Sacagawea’s blue beaded belt. It is not clear whether Sacagawea offered it as a trade item or she was forced to give it up. This entry by Clark on November 20, 1805 describes the exchange:

“one of the Indians had on a roab made of 2 Sea Otter skins the fur of them were more butifull than any fur I had ever Seen both Capt. Lewis & my Self endeavored to purchase the roab with different articles at length we precured it for a belt of blue beeds which the Squar-wife of our interpreter Shabono wore around her waste.”

This is a Shoshone replica of the blue beaded belt that Sacagawea traded with the Chinooks.

After reaching the Pacific on November 15, 1805 the expedition needed to settle for the winter. A vote was required from all the members in order to decide where to set up camp. Sacagawea voted for a place with plenty of potatoes, she was outvoted.

“[A vote of the men, as to location of winter quarters.] Janey [Sacajawea? — Ed.] in favour of a place where there is plenty of Potas.”

That Sacagawea, a Native American woman, and York, an African American slave, were allowed to vote was extraordinary considering the times. African Americans were subjected to slavery and Native Americans where not considered citizens, women were not allowed to vote. Abolition and women’s suffrage would have to wait close to six more decades. After the publication of the 1902 novel by Eva Emery Dye, Sacagawea became a symbol for women’s rights and a face for the National American Woman Suffrage Association. 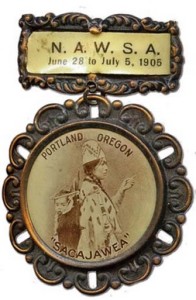 Sacagawea, the face of the National Woman Suffrage Association during the early 20th century.

Next – The years after the expedition >>