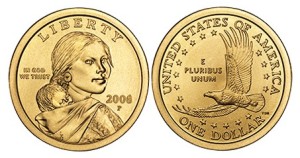 From 2000 to 2008 the eagle was part of the design on the reverse of the coin. Different designs were used every year after 2009.

The Sacagawea Dollar coin was first released for circulation on January 27, 2000 with the purpose of honoring Sacagawea, the Shoshone woman who accompanied Lewis and Clark on their expedition to the Pacific Ocean.

On June 1998 the Dollar Coin Design Advisory Committee, supported by members of the public, recommended creating a dollar coin with the image of Sacagawea. The final design decision was influenced by the Native American community, artists, historians, members of Congress and the public in general through e-mails, letters and phone calls. This was the first time in the history of the US Mint that the public played such an important role in choosing the final design of a coin.

The designer of the obverse of the coin was sculptor Glenna Goodcare. This side features Sacagawea with her infant son, Jean Babtiste Charbonneau, who was fifty five days old when the expedition departed Fort Mandan. Because there are no portraits of Sacagawea the designer used a Shoshone University student, Randy’L He-dow Teton, as a model of a Native Shoshone woman.

The reverse of the coin was designed by Thomas D. Rogers. It features a soaring eagle surrounded by seventeen stars representing the union members in 1804, at the start of the Lewis and Clark expedition. This design was used from 2000 until 2008. Starting in 2009 the reverse design has been changed every year and depicts different characteristics of Native American culture.

The US Mint decided to use the letter “g” in the spelling of Sacagawea, which means “bird woman” in Hidatsa. The decision was based on the fact that it is the most accepted spelling by contemporary works and on the popularity among historians. For more about the controversy of the spelling of the name of this Native American heroine click here.

Why is Benjamin Franklin on the $100 bill?