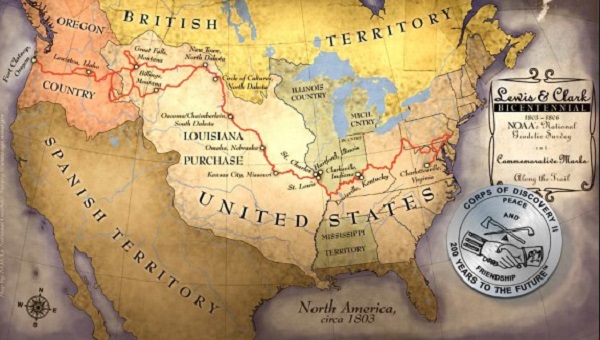 The Corps of Discovery route from Fort Mandan to the Pacific, 5,000 miles, 16 month journey.

Sacagawea proved to be an asset to the expedition, her role was not just that of an interpreter but also was an assistant on the trail. Throughout the journey Sacagawea served as a token of peace as her presence showed Native American nations that the group of explorers was not hostile and had friendly intentions.

Sharing her knowledge of native foods

As soon as they departed from Fort Mandan she shared her knowledge of local foods such as roots and fruits eaten by the natives and not previously known by westerners, a great complement to the explorers’ diet. 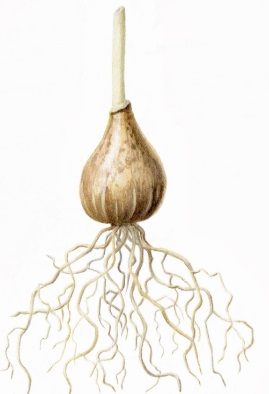 The camas root was a new carbohydrate source for the explorers, long a staple food for Native Americans.

An observation by Lewis on April 9 about Sacagawea:

“when we halted for dinner the squaw busied herself in serching for the wild artichokes which the mice collect and deposit in large hoards. this operation she performed by penetrating the earth with a sharp stick about some small collections of drift wood. her labour soon proved successful, and she procurrd a good quantity of these roots”

On May 8, 1805 Clark made the following entry in his journal:

“In walking on Shore with the Interpreter & his wife, the Squar Geathered on the Sides of the hills wild Lickerish, & the white apple as called by the angegies and gave me to eat, the Indians of the Missouri make great use of the white apple dressed in different ways”

Sacagawea’s strength of mind and quick determination saved important documents and instruments when a boat in which they were traveling capsized. On May 15, Lewis wrote:

“the Indian woman to whom I ascribe equal fortitude and resolution, with any person on board at the time of the accedent, caught and preserved most of the light articles which were washed overboard.”

After that incident and as recognition for her action, Lewis and Clark named a river after Sacagawea, the Sacagawea or Bird Woman’s River which is located in north central Montana and is about 30 miles long.The river is a tributary of the Musselshell River which later joins the Missouri River. This is the May 20, 1805 journal entry that Lewis made describing how they named the river after the Shoshone heroine:

“The hunters returned this evening and informed us that the country continued much the same in appearance as that we saw where we were or broken, and that about five miles abe the mouth of shell river a handsome river of about fifty yards in width discharged itself into the shell river on the Stard. or upper side; this stream we called Sah-ca-gar me-ah or bird woman’s River, after our interpreter the Snake woman.”

On mid June Sacagawea fell ill for about 10 days. She suffered of fever and abdominal pain and was under the care of Captain Clark. Clark used the popular bleeding technique of the times to relieve the fever. He made compresses with barks and laudanum and placed it in her abdomen. She started feeling better after drinking sulphur water from a nearby spring. Captain Lewis fell sick at the same time, he had the same symptoms but lasted for only one day.

I reached the camp found the Indian woman extreemly ill and much reduced by her indisposition. this gave me some concern as well for the poor object herself, then with a young child in her arms, as from the consideration of her being our only dependence for a friendly negociation with the Snake Indians on whom we depend for horses to assist us in our portage from the Missouri to the columbia river.

she complained very much and her fever again returned. I rebuked Sharbono severely for suffering her to indulge herself with such food he being privy to it and having been previously told what she must only eat. I now gave her broken dozes of diluted nitre untill it produced perspiration and at 10 P.M. 30 drops of laudnum which gave her a tolerable nights rest. … After dark my dog barked very much …

When the expedition arrived near Shoshone lands, Sacagawea recognized some of the landmarks as stated by Lewis in his journal dated July 22, 1805.

“The Indian woman recognizes the country and assures us that this is the river on which her relations live, and that the three forks are at no great distance. this peice of information has cheered the sperits of the party who now begin to console themselves with the anticipation of shortly seeing the head of the missouri yet unknown to the civilized world.”

Beaverhead Rock recognized by Sacagawea as a landmark where the Shoshone people lived.

A journal entry by Lewis on July 30 shows that Sacagawea recognized the area where she was abducted by the Hidatsas.

“sharbono, his woman two invalleds and myself walked through the bottom on the Lard. side of the river about 41/2 miles when we again struck it at the place the woman informed us that she was taken prisoner. here we halted untill Capt. Clark arrived which was not untill after one P.M.”

On August 8, 1805 Lewis wrote this entry in his journal observing that Sacagawea recognized the Beaverhead rock, after which Sacagawea reassured that her people could be found down the stream of the river. Lewis with other members set out to find the Shoshones.

“the Indian woman recognized the point of a high plain to our right which she informed us was not very distant from the summer retreat of her nation on a river beyond the mountains which runs to the west. this hill she says her nation calls the beaver’s head from a conceived remblance of its’s figure to the head of that animal. She assures us that we shall either find her people on this river or on the river immediately west of it’s source; which from it’s present size cannot be very distant.”

It took Lewis three days to find Sacagawea’s people. Clark arrived with the rest of the expedition some seven days later.

Once they recognized the Shoshone people, Sacagawea made a discovery; the chief was his brother, Cameahwait. It was through Sacagawea that the Corps was able to acquire horses to carry their cargo and a guide to lead them through the Bitterroot Mountains and the Columbia River. 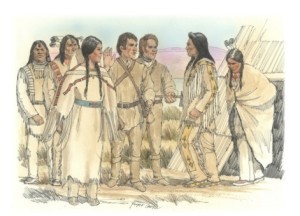 Sacagawea and her brother the Chief Cameahwait. Illustration by Roger Cooke.

On August 17, 1805 Clark described the meeting of Sacagawea and her brother Cameahwait:

“The Interpreter & Squar who were before me at Some distance danced for the joyful sight, and She made signs to me that they were her nation, (By sucking her fingers.)…       The Great Chief of this nation proved to be the brother of the woman with us and is a man of Influence Sence & easey & reserved manners, appears to possess a great deel of Cincerity. … every thing appeared to astonish those people. the appearance of the men, their arms, the Canoes, the Clothing my black Servent & the Segassity of Capt Lewis’s Dog”.

Having her voice heard

The expedition reached the Pacific on November 15, 1805 and set their winter camp at Fort Clatsop near Astoria, Oregon. Sacagawea was allowed to vote as to where the camp should be built, as practical as she was, she wanted a place where they could find plenty of potatoes. She was outvoted. That Sacagawea, a Native American woman; and York, an African American slave, were allowed to vote was extraordinary for the times when women did not have the right to vote and African Americans were subjected to slavery. Women’s suffrage and abolition would have to wait another six decades.

“[A vote of the men, as to location of winter quarters.] Janey [Sacajawea? — Ed.] in favour of a place where there is plenty of Potas.”

On Monday 6th of January, 1806 Clark observed in his journal that Sacagawea insisted to be taken with him to see the ocean and a stranded whale.

“The last evening Shabono and his Indian woman was very impatient to be permitted to go with me, and was therefore indulged; She observed that She had traveled a long way with us to See the great waters, and that now that monstrous fish was also to be Seen, She thought it verry hard that She Could not be permitted to See either (She had never yet been to the Ocian).” 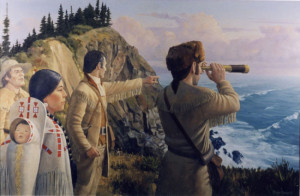 Sacagawea insisted on seeing the ocean.

They stayed in Fort Clatsop until March and then parted back with the expedition to her home with the Mandans. Charbonneau was paid $533.33 and 320 acres of land for his service as an interpreter. Sacagawea was paid nothing.

During the expedition Clark had become very fond of Jean Baptist who he called “Pompey”. In a letter dated August 20, 1806 Clark offered Charbonneau and Sacagawea to raise their son as his own and pay for his education.

Next in Biography – Later Years and Death >>