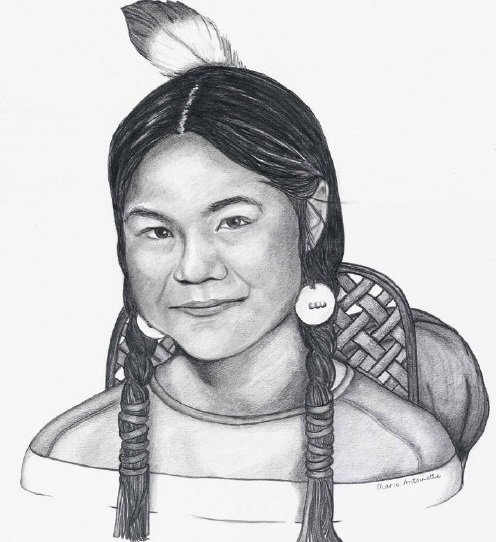 Sacagawea’s actual day of birth is not known. Scholars think she may have been born around 1788 in Lemhi County, Idaho among the Agaidikas or Salmon-Eater Shoshones of the Lemhi Shoshone tribe. The Lemhi Shoshone belonged to the north band of Shoshones that lived along the Lemhi and Salmon Rivers banks.

The Shoshones were constantly attacked by the Hidatsa Indians also known as Minitaree Sioux or Gros Ventre, allies with the Mandans, and by the Blackfeet. These tribes carried rifles provided by white traders which gave them advantage over the Shoshones. Most of the times the Shoshones were defeated, had their possessions raided or destroyed and their members killed or kidnapped. Around 1800 when Sacagawea was between 11 or 13 years old, the Hidatsas raided her camp and kidnapped her and other young Shoshone women making them their prisoners. They took them to their encampment on the Missouri River, about twelve miles from current Washburn, North Dakota. Scholars estimate that there were approximately 3,000 to 4,000 Hidatsas and Mandans living along the Missouri River at that time.

Toussaint Charbonneau, a French Canadian, who had been living with the Hidatsas and Mandans since 1796 took an interest in Sacagawea. He acquired Sacagawea “Bird Woman” and another Shoshone girl “Otter Woman”, and made them his wives. Charbonneau was about 37 years old and Sacagawea 16. Charbonneau was born near Montreal, Canada and was an independent trader, he obtained goods on credit and traded them with the Indians. He lived among the Mandans and Hidatsas and adopted their way of life. 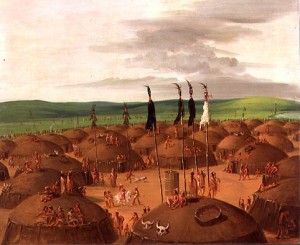 Lewis and Clark at Fort Mandan

On December 21st, 1804 Lewis and Clark and his group of Corps of Discovery explorers decided to settle in Fort Mandan for the winter. Here is where they met Toussaint Charbonneau, who lived among the Mandans. He applied for the job of Hidatsa/Mandan interpreter. When Lewis and Clark found out that he had a Shoshone wife they took interest in him as they would need their help acquiring horses once they reached the Shoshone nation. Sacagawea, who was pregnant, spoke both Shoshone and Hidatsa, Charbonneau Hidatsa and French but did not speak English. Lewis and Clark resorted to Private Francois Labiche, who spoke French and English. The English-Shoshone communication would require a four language chain interpretation.

Picture of Toussaint Charbonneau introducing one of his wives, Sacagawea, to Lewis and Clark. Painting by Split Rock

Sacagawea gave birth on Monday, February 11, 1805 to a healthy baby boy named Jean Babtiste Charbonneau, nicknamed “Pompy”. His birth was aided by Lewis who described her labor as tedious with violent pain. Lewis wrote in his journal that she was administered small pieces of rattle snake added to a small quantity of water to speed up her delivery. During the expedition Clark became very fond of Jean Babtiste and offered Charbonneau and Sacagawea to give him an education and raise him as his own child. 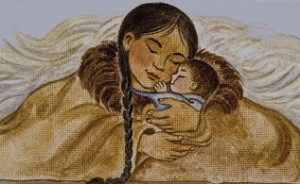 The following is the journal entry made by Lewis on February, 1805 about the birth of Jean Babtiste:

“about five Oclock this evening one of the wives of Charbono was delivered of a fine boy. it is worthy of remark that this was the first child which this woman had boarn, and as is common in such cases her labour was tedious and the pain violent; Mr. Jessome informed me that he had freequently admininstered a small portion of the rattle of the rattle-snake, which he assured me had never failed to produce the desired effect, that of hastening the birth of the child; having the rattle of a snake by me I gave it to him and he administered two rings of it to the woman broken in small pieces with the fingers and added to a small quantity of water. Whether this medicine was truly the cause or not I shall not undertake to determine, but I was informed that she had not taken it more than ten minutes before she brought forth perhaps this remedy may be worthy of future experiments, but I must confess that I want faith as to it’s efficacy.”

Next in Biography – Sacagawea joins the Lewis and Clark Expedition >>