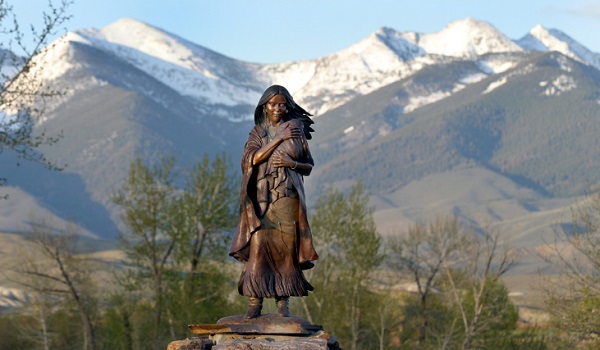 Statue of Sacagawea cast in bronze near Salmon, Idaho. Photograph by Jim Foster.

The place and date of death of Sacagawea is as controversial as the spelling of her name. The most accepted and the one that most historians support is 1812 as the date of her death. Others, relying on American Indian oral tradition believe that she died in 1884 in Shoshone lands.

“This Evening the Wife of Charbonneau, a Snake Squaw, died of a putrid fever she was a good and the best Woman in the fort, aged abt. 25 years she left a fine infant girl.”[1]

Sacagawea was living in Fort Manuel when she died on December 20, 1812. The cause of her death was putrid fever or typhus, a parasite bacterium spread by fleas. This disease is deadly unless treated with antibiotics.

At her death both her children, Lizette and Jean Babtiste, were entrusted to Clark who formally took their guardianship by a St. Louis Orphan’s Court proceeding dated August 11, 1813[2]. Jean Babtiste was already under the care of Clark, who enrolled him in boarding school, when his mother died. It is believed that Lizette did not survive infancy as there are no further accounts her life. For the adoption process to have proceeded there had to be records of the mother’s and father’s death or disappearance. Toussaint Charbonneau was presumed death.

Over a decade later Clark compiled a list of the member of the Lewis and Clark expedition and listed “Se-car-ja-we-au Dead”. It is believed that Luttig was the source of Clark’s information.

Luttig’s journal record offers evidence about the death of Charbonneau’s wife but Sacagawea was not his only snake wife. By not specifying her name he left doubt for those who did not want to see Sacagawea dead and her legend started growing immediately.

According to American Indian oral narrative and supported by Dr. Grace Raymond Hebard of the University of Wyoming in her book Sacagawea: “A Guide and Interpreter of the Lewis and Clark Expedition”, Sacagawea died in 1884. Her theory holds that Sacagawea left Charbonneau and moved to Shoshone lands in Wyoming where she died in 1884.

In 1924 Dr. Charles Eastman was hired by the Bureau of Indian Affairs to locate where Sacagawea’s body might rest. He interviewed many elder Native Americans and learned of a Shoshone woman named Porivo who had claimed she was part of the Lewis and Clark expedition to the Pacific. According to oral narrative this woman had lived in Wyoming with her two sons, Bazil and Baptiste, who spoke several languages including English and French. When her husband died she returned to her ancestral land at the Wind River Indian Reservation where she died on April 9, 1884. She was known as “Bazil’s mother”. Reverend John Roberts presided her memorial service.

Next – Controversy of Sacagawea’s name >>