Timeline of the life of Sacagawea 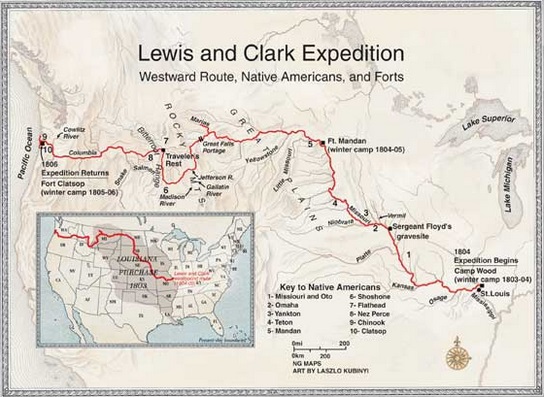 The Corps of Discovery route from Fort Mandan to the Pacific, 5,000 miles, 16 month journey.

c.1788 – Sacagawea was born in Lemhi County, Idaho. She belonged to the Agaidika band of the Northern Shoshone tribe also known as Snake Indians.

c.1800 – In a confrontation between the Hidatsas and Sacagawea’s tribe, the Shoshones, Sacagawea and other young women were kidnapped. The Hidatsas sold Sacagawea to French Canadian fur-trader, Toussaint Charbonneau, who made her one of his wives.

July 4, 1803 – The U.S. government announced the acquisition of new land in the northwest know as the Louisiana Purchase.

Summer 1803 – President Jefferson ordered the Corps of Discovery, led by William Clark and Meriwether Lewis, to explore the newly acquired lands in the American Northwest.

Fall/Winter 1803 – Lewis and Clark set up Camp Wood in Illinois for the new recruits of the Corps of Discovery.

May 1804 – The expedition departed from Camp Wood and started its journey up the Missouri River towards the Pacific Ocean.

November 2, 1804 – The expedition settled for the winter in the land of the Mandans and Hidatsas in present day North Dakota. They set up Fort Mandan named after the Mandan Indians.

November 4, 1804 – Lewis and Clark met Toussaint Charbonneau and hired him as their Hidatsa interpreter. Sacagawea would accompany her husband in the journey as she spoke the Shoshone language. Sacagawea was pregnant.

April 7, 1805 – The expedition leaved Fort Mandan. Sacagawea, with 55days old Jean Babtiste in her arms, accompanied the expedition in a journey that would cover 5,000 miles or 8,000 km and last 16 months. Sacagawea started sharing her knowledge of local food.

May 14, 1805 – A wind storm almost overturned one of the expedition’s boats. They lost some medicine, gun powder, garden seeds and culinary articles.

Sacagawea acted fast and caught most of the lighter articles such as research notes, books and instruments.

May 20, 1805 – In recognition for Sacagawea’s action a river was named after her. The Sacagawea River is a tributary of the Musselshell River and is located in north central Montana. It is 30 miles (48km) long. The River is also known as the Bird Woman’s River.

June 10, 1805 – Sacagawea became sick for seven days. Clark and Lewis tended her during her recovery, they attributed her improvement to sulphur water from a nearby spring.

August 8, 1805 – Sacagawea recognized Beaverhead Rock and the river banks where the Shoshones lived.

August 17, 1805 – The expedition arrived at Shoshone lands. Sacagawea recognized her brother, Chief Cameahwait, and a woman who had been taken prisoner with her.

Sacagawea helped the expedition get horses which were needed for the next part of the journey. Sacagawea translated from Shoshone to Hidatsa, Charbonneau from Hidatsa to French and Labiche from French to English.

November 24, 1805 –Members of the expedition voted for a place to camp for the winter. Sacagawea was in favor for a place where there is lots of potas (potatoes). They chose Fort Clatsop in Astoria, Oregon.

March 23, 1806 – After the winter had passed, the expedition packed up and prepared for their way back.

May 23, 1806 – Jean Babtiste (Pompy) fell ill, he suffered from fever and swollen neck, he was treated by Clark with cream of tartar, sulphur and onions.

July 25, 1806 – During the trip back on the Yellowstone River, Clark climbed a 200-feet tall rock and named it “Pompy’s Tower” after Jean Babtiste, Sacagawea’s son.

August 17, 1806 – Sacagawea and Charbonneau arrived home in the Mandan village on the upper Missouri River. Charbonneu was paid $533.33 and 320 acres of land for his service as interpreter. Sacagawea got nothing.

August 20, 1806 – In a letter to Charbonneau and Sacagawea, Clark offered to raise their son as his own and give him an education.

October 30, 1810 – Charbonneau took possession of the 320 acres he earned for his services to the Corps of Discovery.

March 23, 1811 – Charbonneau did not adjust to the life tilling the land and sold his property to Clark for $100. Charbonneau and Sacagawea moved to Ford Manuel Lisa. They left Jean Babtiste with Clark who enrolled him in a boarding school.

December 20, 1812 – One of the wives of Charbonneau, probably Sacagawea, died in South Dakota. The cause of death was putrid fever or typhus. She was about 25 years old.

1813: Clark signed the adoption papers for Lizette and Jean Babtiste.

1875 – A woman living in the Wind River Reservation claimed to be Sacagawea.

Next – The controversy of Sacagawea’s death >>